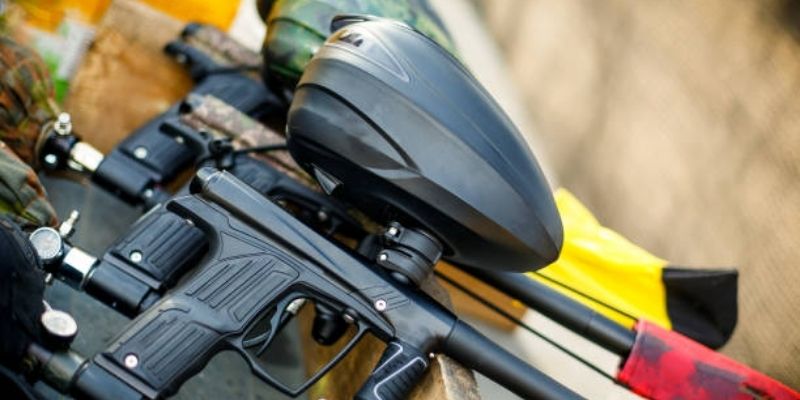 Paintball markers are guns or firearms. They use propellant to shoot paint-filled pellets at high velocity. Most will carry between 20 and 200 rounds of ammunition in an internal magazine that feeds into the chamber for firing.

The paintballs must be forced down a barrel with compressed air or some other propellant (nitrogen, carbon dioxide, or compressed air).

What are the different types of markers?

The two main types are mechanical and electronic.

What Is A Mechanical Paintball Marker?

Mechanical paintball markers use an internal spring or external air source to shoot the ball with. They are not as complicated as electronic markers, but they can require some maintenance over time.

These guns also work better in cold conditions than more expensive electrical models and will shoot every time you pull the trigger.

How Do Mechanical Paintball Markers Work?

Mechanical paintball markers function through the use of a bolt system that works behind the barrel. The bolt contains a spring and a piston that sits inside the marker’s bore behind the paintball, held in place by safety or sears.

When you pull the trigger, it releases the safety, which fires from the rear of the marker striking an air transfer tube that is attached to your compressed air supply. The shock from this impact forces the bolt forward, compressing the spring until it strikes the paintball in the chamber.

The compressed spring drives this paintball down the barrel and out of your marker. The trigger will return to its original position when you release it, resetting for another shot.

Mechanical markers can be prone to chopping balls because no air can be sent back into the chamber to blow away debris. You will need to clean your marker’s bore fairly regularly, and you should always check for paint in the barrel when you are done playing.

What are the Advantages Of A Mechanical Paintball Marker?

Pneumatic markers have a lot of advantages over electrical models. They are far less expensive to own and operate, making them the best paintball guns for beginners.

They are also more reliable because they have fewer moving parts that can break down. Some players believe this is an advantage over electronic markers because you know exactly what will happen when you pull the trigger.

While they are good for new players, mechanical markers have a number of disadvantages too. Many of these guns can be inaccurate at long range because the barrel is not sealed. Paintballs will break more easily inside the marker over time, and you’ll need to clean your gun more often to keep it running properly.

What is an Electronic Paintball Marker?

Electronic markers are more complicated than mechanical counterparts. They use solenoid valves to fire the paintballs, and they need batteries for power. Some markers will require you to charge them before each game, but others may have an on/off switch that lets you turn it off between games.

What Are The Advantages Of An Electronic Paintball Marker?

Electronic paintball markers have a number of advantages over both mechanical and pump-action guns. They are more efficient because they use less gas per shot, so you don’t need to refill as often.

This makes them kinder to the environment too, but there are some human safety concerns with e-markers as well.

What Are The Disadvantages Of An Electronic Paintball Marker?

Electronic markers have a number of disadvantages because they use exotic technologies and materials that can break down over time. They are not as reliable as pneumatic markers, and you’ll need to replace the batteries from time to time when the charge runs out.

They are also more expensive to buy than mechanical markers, and some players worry that these technologies open the door to cheating in paintball games because there is no way for you to see what is happening inside your marker.

How Do You Find The Best Paintball Markers?

Finding the best paintball guns can be difficult because there are so many choices available. It is important to remember that you are investing in your game, and the better marker you use, the more fun you’ll have to play.

As always, it starts with knowing what type of paintball gun you need. If you are beginning, then a mechanical marker is best. They are inexpensive to operate and maintain, while still giving you a sleek design and reliable firing mechanics.

If you are an advanced player, then an electronic marker will give you increased speeds and better accuracy over longer ranges. They can also play well with different types of paintball fields that may use non-standard sizes and materials.

The next consideration is the weapons platform. Here, you have a few options to choose from. The pump-action marker is inexpensive and easy to use, but they lack style and accuracy compared to other models.

Semi-automatic markers are more popular because they combine reliability with increased firing speeds, but some players find them too complicated for their needs.

The final choice is the fully automatic paintball marker, which is popular with advanced players because it shoots fast and accurately at long ranges. You’ll need to budget extra money for ammunition costs, but you’ll get more shots on target with better accuracy.

Finally, look at the design of your marker before you buy so you know exactly what you need. If you are playing in an urban setting, then a sleek, compact weapon will do the trick.

If you are playing at night or in dense cover, then consider camouflage finishes that help them blend into the environment.

Whatever paintball gun you choose, always consider its design and features along with your own level of experience to get the most fun from your next paintball game.