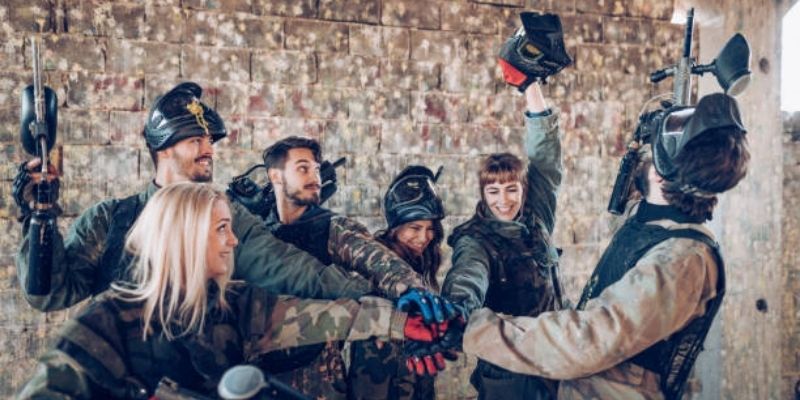 Whether you’re a beginner or a pro, there’s no denying that paintball is awesome. Here are seven reasons why spending your weekend playing paintball is the best way to spend your time.

7 Reasons Why Paintball Is the Best Way To Spend Time

When we’re at work, we sit in front of a computer screen for hours on end – it’s not too difficult to see why so many people are overweight and out of shape. What’s the cure for this? Interval training.

Paintball is an intense game that combines endurance, strategy, and adrenaline all in one. If you’re not up for playing a full game of paintball, find some friends who are willing to go out into the woods with you and play capture the flag or just run around like lunatics and shoot each other in the woods.

There are several valuable skills that you can pick up by playing paintball. The best of which is how to shoot a gun. Let’s be honest, not many people have fired a real firearm before – this means that there are fewer people who understand how to properly operate one.

Of course, safety should always come first when it comes to firing a real gun, but learning how to handle a firearm safely and accurately is an invaluable skill.

Playing paintball with friends is probably the most addicting part of the game. Even if you’re terrible (which is highly unlikely) it’s fun to be able to laugh about your mistakes and enjoy time spent with great people. In fact, sometimes it’s more fun to lose a game than win.

When I play paintball with my friends, we all know how ridiculous we look running around in the woods dressed up as a bunch of commandos – but at the end of the day, it doesn’t matter who won or lost because we had a blast out there!

Paintball is a great way to release your inner competitor and just have some fun engaging in friendly competition. Who can shoot their targets the fastest? Who can capture the enemy flag the most times without dying? Whatever you enjoy most about a competitive sport, paintball allows you to turn it up a notch and explore your competitive spirit.

Paintball is a mental game, requiring you to use strategy and critical thinking skills in order to win. This means that playing paintball will help exercise parts of your brain which typically don’t get much stimulation through typical daily activities. Paintball forces you to stay alert, be strategic, and think quickly to outsmart your opponents.

One of my favorite aspects of paintball is the scenarios that can be played which make it feel like you’re in a real-life video game. Although I’m not talking about zombie-apocalypse themed paintball or anything too over the top, there are plenty of fun paintball fields that offer different scenarios for their events.

Whether it’s ‘capture the flag’ or ‘bomb squad,’ most paintball centers have a scenario event that is perfect for a birthday party, bachelor party, or group of friends looking to experience something exciting together!

The thrill of running around with a paintball gun and shooting at your friends is unbeatable. Adrenaline builds up inside of you when you realize that your opponent might be right around the corner, ready to ambush you and take the flag before you can get there.

It’s a rush knowing that if you slip up, get shot, or make too much noise, then it could mean the difference between winning and losing the game!

Paintball is an awesome game that allows you to enjoy the great outdoors, explore your competitive spirit and have fun with friends. Whether it’s a birthday party or just a day out with some buddies, paintball is an exciting activity that everyone can participate in!

If you’re interested in playing paintball but don’t have any friends who want to join you, make some new ones at your local paintball center. Nothing makes the game more fun than a group of friends who are there for each other and ready to go all out in order to win!