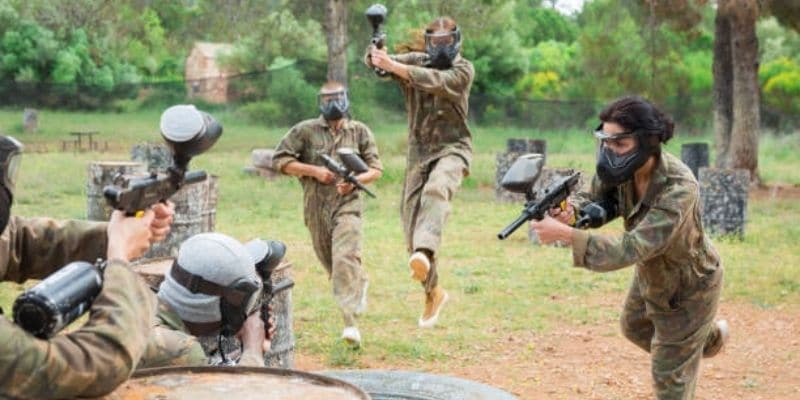 In order to be successful in playing paintball, it is important to have the right gear, know the game basics and understand the different positions. You can also increase your chances of winning by knowing how to avoid being hit and by using tactics with your team. Let’s take a closer look at what you need to know to become a paintball fighter.

If you want to play paintball, the first thing you will need to do is get some gear. The basic essentials are a paintball marker (gun), CO2 or compressed air tanks and goggles.

You may also consider getting other items like padding for your forearms and elbows or chest protector, field-tested shoes and a hat or mask. By having the right paintball gear, you will help ensure that you enjoy your game and experience no problems while playing.

There are 2 types of primary paintball gun designs, mechanical (semi-automatic) and electro-mechanical (fully automatic). You can use either type to play paintball.

However, if you want to take part in national/international competitions, your gun must be semi-automatic. Also, if you are new to the game or don’t have good aim yet, using a mechanical marker is advisable because it only fires one shot per trigger pull.

Electro-mechanical guns are advantageous for experienced players who can quickly switch between various firing modes. They are able to fire multiple shots in succession and to adjust the rate of fire (RPS) with a push or pull of a button.

As for paintballs, many people assume that different sizes mean different balls are used for different types of games. However, this is not the case. There is just one size for paintballs, .68 caliber (15.5 mm) and that’s it! This is also the same size used in all national/international competitions.

Playing on a professional level is different from playing as a recreational sport. When you play on a field designed for competition, you will need to get familiar with the different positions which can be roughly divided into three groups: offensive, defensive and support.

Offensive players are responsible for shooting and scoring while the defensive players try to cover their own team’s flag and to intercept shots fired at teammates. The support players provide defense and offense when needed and offer cover fire in a situation where a teammate must reload in the open.

Teamwork is essential when you play paintball, which means that it’s not enough for each player to only focus on his or her own role. Instead, players need to communicate with one another and determine who should do what at any given moment in time. In order to win at paintball, you will need to be an effective team player.

While it may seem like the best way to win at paintball is by getting shots on your opponents as much as you can, this is not the case. It’s actually better for you if you are not being shot! Why? Because being hit means you are out of the game until you can get back to your team’s respawn zone.

The factor that determines who will win a paintball fight is not how many times each player got hit but rather how many points each collected. Therefore, if you get hit once or twice during the match, it may be better for you to hide and avoid being hit again, instead of running around trying to shoot your opponents.

As mentioned above, the key to winning at paintball is not by getting as many shots on your opponents as you can but rather by scoring points. This means that using tactics is essential for a good performance and for winning matches.

Knowing how to use cover, to move around the field and to perform a firefight are very important.

When you play paintball, remember that it is a game of stealth and luck. Therefore, avoid being shot by keeping out of sight from your opponents while trying to get shots on them.

Move from cover to cover when needed so you can advance gradually towards your opponent’s flag. Also, it is important to be aware of your surroundings and try to predict where your opponents could be hiding after they fired shots at you.

Lastly, remember that paintball is not like a movie or computer game where you can get killed doing nearly anything. You don’t stand much chance against experienced players if you play too aggressively or recklessly.

In conclusion, as you can see from the information presented above, paintball is a very interesting and cool sport that can be practiced by people of all ages. There are many types of equipment and countless tactics to use on the field, which makes it even more exciting and challenging.

So what are you waiting for? Grab your gear and get out to the field to enjoy a day of paintball!