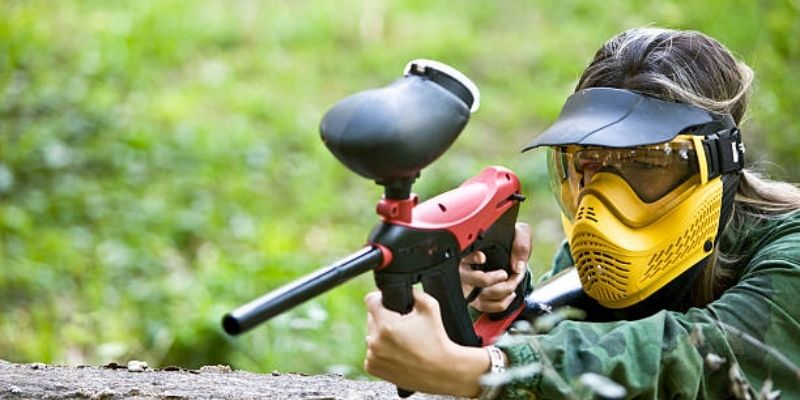 Paintball guns are a lot of fun, but how far can they really shoot? You might be surprised to find out just how far these guns can actually shoot! In this blog post, we will explore the maximum distance that a paintball gun can shoot.

We will also discuss some popular paintball guns and their shooting range. So, if you want to learn more about the maximum distance that a paintball gun can shoot, keep reading!

The Maximum Distance a Paintball Gun Can Shoot in Meters

In general, the maximum distance that a paintball gun can shoot is around 250 feet. However, there are some exceptions to this rule. For example, high-end guns like Azodin Kaos Pump, Planet Eclipse GTEK or Empire Axe Pro can shoot up to 400 feet and more.

On the other hand, entry-level guns like Azodin Blitz 3 or JT SplatMaster start shooting at a distance of approximately 100 feet and less.

Longer barrels have greater accuracy and allow players to shoot from longer distances. That being said, if you want to reduce the maximum distance that your paintball gun can shoot, you should consider using a shorter barrel.

The maximum distance that a paintball gun can shoot depends on several factors, including barrel size, hopper capacity and paintballs themselves.

The balls are actually not limited to one specific maximum shooting distance – they are most accurate at around 75 feet, but they can still be used for shooting from a distance of up to 150 feet.

However, if you want to shoot at a maximum possible distance with accuracy, it is best to use lighter paintballs.

As mentioned earlier, not all paintball guns have the same shooting range. That is why it is important to determine how far you want your paintball gun to shoot before making a purchase.

On the other hand, high-end Azodin Blitz 3 and Tippmann A5 are less accurate compared to other models that have been mentioned thus far.

Tiberius T9.1 and T9.2 Paintball Guns Shoot from a Distance of up to 150 Feet

If you want a more accurate paintball gun, take a look at the Tiberius Arms T9.1 or T9.2. These guns shoot with extreme precision and accuracy – they can accurately shoot from a distance of up to 150 feet.

These guns look very similar, but the only difference is that T9.1 is compatible with CO2 cartridges and T9.2 uses compressed air (HPA tank).

Azodin Kaos Pump Can Shoot up to 200 Feet Away

The Azodin Kaos Pump Paintball Gun is a revolutionary paintball gun that can shoot from a distance of up to 200 feet. Kaos Pump has a unique design, and it comes as an entry-level gun with a low price tag.

The Kaos Pump shoots great out of the box, but if you want even greater accuracy, you should consider upgrading it with a longer barrel.

Empire Axe Pro Paintball Gun – the Longest Range of Them All

Finally, if you want to talk about guns with the longest range possible, take a look at the Empire Axe Pro. This is a high-end paintball gun that comes with a 12 inch OLED board to allow players to easily change their settings.

Not only can the Axe Pro shoot up to 300 feet, but it is also extremely accurate – you can use the same gun for shooting from a range of 75 feet and from a range of 175 feet without making any changes.

What’s your favorite paintball gun that shoots from long distances? Let us know in the comments below.