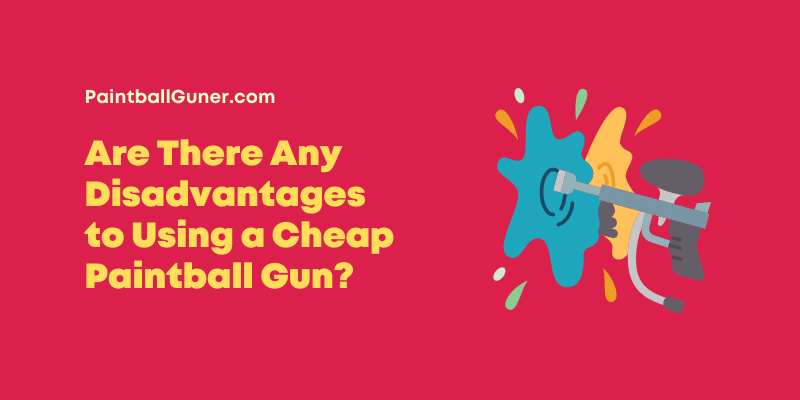 The paintball market is absolutely flooded with a wide variety of options. This means that it has never been easier to go into a store and buy a complete paintball gun for well less than $100. You can find great deals on cheap paintball guns from companies such as Tippmann, Spyder, BT, Kingman, and so forth.

What are the downsides of choosing a low cost paintball gun? Which cheap paintball guns should be avoided at all costs? The following article will outline some of the disadvantages of using an economical paintball marker.

Cheap paintball guns are often made with inferior materials. The quality of plastic, aluminum and other components used will not hold up to the same level as comparable items in higher end models.

The majority of cheap paintball guns also do not work particularly well in colder weather. Many entry level models (and some mid-level guns) are not designed to operate in temperatures below 50 degrees Fahrenheit. If you play in cold weather frequently, this may be an issue for you.

Cheap paintball guns also typically do not come with a lot of extra features and accessories, such as Picatinny rails, vertical foregrips, and so forth. Features like these can be very handy when building your ideal paintball gun, but they simply aren’t available on most inexpensive models.

What Are The Drawbacks of Cheap Paintball Guns?

On paper, cheap paintball guns seem like a great way to save money. However, the disadvantages are fairly significant. The following are some of the drawbacks to using low end paintball markers:

For the most part, inexpensive guns simply don’t operate as well as their more expensive counterparts. They will typically jam and misfire much more frequently than better paintball guns too.

The majority of entry level models shoot at rates between 3-5 balls per second. Higher end models typically shoot around 10+ balls per second. Although this may not sound like it makes too much of a difference, in actuality the higher ROF guns are significantly more effective on the field than slower firing models.

Many entry level paintball guns simply aren’t designed to operate in temperatures below 50 degrees Fahrenheit. Many of them will simply not fire at all if they are exposed to freezing temperatures for too long. If you play in cold weather frequently, this may be an issue for you.

No Extra Features or Accessories

Cheap paintball guns typically do not come with many of the extra features that higher end models come with. Not having these features may hinder your ability to customize your gun for the field.

Cheap paintball guns are often made with low quality metals and plastics that cannot stand up to the test of time. This is especially true if you play paintball frequently, as high end models are built to be rugged and durable.

Why You Don’t Want to Use Cheap Paintball Guns?

The majority of inexpensive paintball guns simply are not designed to the same standards as high end models. They typically have a low rate of fire, poor performance in cold weather and so forth. These weaknesses make them much less effective in the field than higher end models.

In addition, most cheap paintball guns do not come with a lot of extra features or accessories. This can impair your ability to customize the gun for the field you are playing on. In short, even if an inexpensive model has a feature that you want to use, it probably won’t have several other features that would make it more effective for you.

Finally, cheap paintball guns are often made with low quality metals and plastics that cannot stand up to the test of time. If you play paintball frequently, using a cheap gun will only lead to headaches down the road as it slowly breaks down on you.

What Are Some Good Low Cost Paintball Guns?

Although much attention is paid to cheap paintball guns, there are some excellent models available for well under $100. The following three firearms are both safe to use and offer very good value.

The Spyder Victor Semi-Auto Paintball Marker is perfect for beginner and intermediate players. This marker is field ready and fully adjustable. You can easily adjust the velocity of the marker from 280 feet per second to over 350 feet per second.

This lightweight paintball gun is ideal for younger or smaller players who will find this easier to hold and handle than most other low impact markers on the market today. The Splatmaster also features a larger capacity hopper so you can play longer without having to reload as often!

Mercury Rise Venom Semi Auto .68 Caliber Paintball Gun Marker is made of CNC Aluminum and Anodized so it’s durable and lightweight. The aluminum ASA Bottomline adapter makes it easy to install the air source hose. It has a molded grip with an aluminum foregrip for comfort, control, and stability.

It comes with a tool-free plug design which allows you to easily open the gun up to make any adjustments or maintenance needed. The external velocity adjuster allows you to make quick changes on the field without having to take apart your marker.

Cheap paintball guns can actually provide quite a bit of value. However, it’s important to know what you’re looking for and which models best fit those needs. This way, you can buy cheap paintball guns without too much risk or hassle.

If you choose any of the three firearms listed above, not only will you get a dependable and effective product at a great value, but you’ll also have the guarantee of purchasing from trusted companies. For this reason alone, these guns are a smart choice for anybody who is looking to save some money on their purchase.