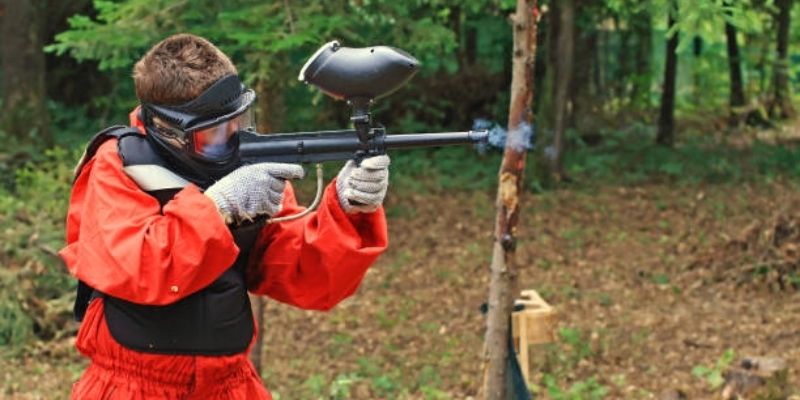 Paintball is a fun, recreational activity enjoyed by people of all ages. However, there is some debate over whether or not it is possible to die from a paintball gunshot. In this blog post, we will look at the dangers of paintballing and explore the possibility of death as a result of playing the game.

Can You Die from a Paintball Gun Shot?

Paintballs, when shot out of a paintball gun, do not normally cause serious injury. Paintballs hurt and can leave welts and bruises on the body, but they are considered relatively safe for recreational use.

However, paintballs have been known to cause serious injuries in some cases – for example, eye damage or infection from contaminated equipment. In the case of an eye injury, for example, a paintball can lead to corneal abrasions or even blindness if not treated quickly enough.

In rare cases, someone who is shot in the chest or other vital organs with a paintball can die. For example, here is a case of a 19-year old male who was accidentally hit in the chest and then collapsed and died minutes later.

What are the Chances of Dying from a Paintball Injury?

As mentioned above, the chances of dying as a result of being shot with a paintball are very low. There are cases where people have died after being hit by a paintball, but almost all these deaths were caused by pre-existing health conditions or due to the person being hit in the chest or head.

Although paintballs usually do not cause serious injuries, it is possible to suffer a very serious eye injury if you are shot in the eye with a paintball – for example, if the paintball breaks your orbital bone. A broken orbital bone can lead to facial deformities and blindness if not treated immediately, so it is always recommended to use protective eyewear when playing paintball.

What Safety Precautions are Used When Playing Paintball?

Since the chances of dying from a paintball gun injury are very low, there is not much emphasis placed on safety precautions by paintball operators and owners. However, there are still usually some basic safety measures that players should follow when playing paintball.

For example, you should always wear protective clothing such as a helmet and overalls when playing paintball. As stated above, it is possible to suffer an eye injury if hit in the eye with a paintball – especially if the person shooting you has a powerful gun or uses HPA (high-pressure air).

The paintballs themselves are usually made from gelatin, so they are reasonably safe. However, there have been cases where people have suffocated on their own paintballs if they were inhaled into the lungs.

To prevent this from happening, it is always wise to wear a protective mask while playing paintball – especially if you know that your opponent has a very powerful gun. Also, try not to shoot your opponents directly in the face if they do not have a mask on – only shoot them at their torso or legs.

Of course, if you are shot in one of your limbs then it is vitally important that you seek medical attention as soon as possible. If your skin is broken then the chances of contracting an infection are very high, so it is recommended that you visit a medical center or walk-in clinic for treatment.

What Factors Can Increase the Likelihood of Dying from a Paintball Injury?

If you already have a pre-existing heart condition then your chances of dying from being shot with a paintball are increased – especially if you are shot in the chest.

If you have some form of dementia then your chances of dying after being hit with a paintball are increased – especially if you are hit directly on the head or in the chest with a powerful gun. There have been cases where people suffering from dementia died after receiving a very severe blow to the head.

If you have asthma then your chances of dying after being shot with a paintball are increased – especially if you are hit in the chest or directly on the head. The impact of a paintball can cause an asthma attack which can lead to suffocation, so it is always recommended to have your inhaler with you when playing paintball.

The chance of dying from a paintball injury is incredibly low, but there are factors that can increase your chances of dying after receiving a blow to an unprotected part of the body. It is always best to take protective measures when playing paintball – even if you know that your opponent has no guns with a high level of accuracy.

Please note: This article is for educational purposes only and not meant to encourage irresponsible behavior when playing paintball. It is always best to wear protective clothing and a mask when playing paintball, especially if you have any pre-existing medical conditions or believe that your opponent has a more powerful gun.