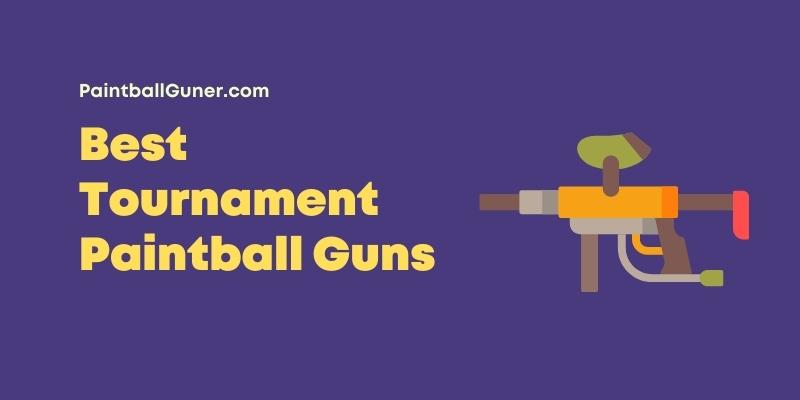 Tournament paintball guns and gear have come a long way in the past 20 years. The first paintball markers were not tournament grade by any means. They were extremely basic and just got the job done.

Few people had them, and they were used mostly for hunting or recreational play. As time went on, markers got better and paintball started growing.

Now there are marks at every price point, from the cheapest to the most expensive, and everywhere in between. It can be overwhelming when trying to figure out what you need for a good starting marker.

So we’ve picked some top picks that we think will suit your needs. Here they are:

Who Needs These Tournament Paintball Guns?

Tournament paintball guns are meant for use in tournaments. If you’re just starting out, it’s highly unlikely that you’ll need a tournament style marker. You’ll want to have more of a mid-range gun to start with and then upgrade to the high end stuff as your skills improve.

That being said, there are a few reasons you may want to go with a tournament style marker:

What to Look for in a Tournament Paintball Gun?

The three main things you’ll need to look out for are reliability, accuracy, and rate of fire. While these are the most important features of any paintball marker, there are other things to consider as well, such as weight and ergonomics.

There is nothing worse than having a marker break down on you in the middle of a game, especially during a tournament where every second counts. Tournament markers are generally more reliable than their mid-range counterparts because they’re made with tighter tolerances and parts that are often “borrowed” from more expensive guns.

In addition, some high end markers are known for being extremely reliable, so much so that they can essentially run forever. If you’re looking for reliability in your tournament paintball gun, look at brands like Dye and Ego.

If you want to be competitive in a tournament, you’re going to need a high level of accuracy. Even if you’re good at clearing bunkers and dodging, the better players will only engage when they can shoot back with 100% accuracy.

So look for markers that are known for their tight shot groupings. Also factor in the barrel upgrades you’ll be able to get with your marker choice.

The acceptable rate of fire is relative to the field size and tournament format. Generally speaking, though, you’ll need a marker that can shoot at least 15 balls per second (BPS) to be up there with the big dogs out on the field.

For smaller fields like X-ball or speedball where bunkers are spread out, you can get away with a slower rate of fire. However, if your marker shoots under 15 BPS and there’s a lot of opposing players buried in bunkers, they’ll be able to pop off several shots before you’re even able to leave the bunker.

While most markers shoot at 10 – 20 BPS, some can shoot upwards of 30 or more BPS. It’s important to know what the acceptable rate of fire is for your specific tournament scenario.

So the next thing you’ll need to decide is how much money are you willing to spend on a marker? If you’re just getting into paintball, it’s probably not wise to drop several hundred dollars for your first model.

The main reasons players want to go with a tournament style marker are reliability, accuracy, and rate of fire. There’s really no right or wrong answer when it comes to choosing a marker.

Just keep in mind that you’ll need better paintball fundamentals and more experience playing the game if you’re going to utilize the full potential of your marker.

Once you’re good enough, though, it’ll be worthwhile to get your hands on a tournament gun. The extra money spent will definitely pay off in the long run when you start winning games and tournaments!