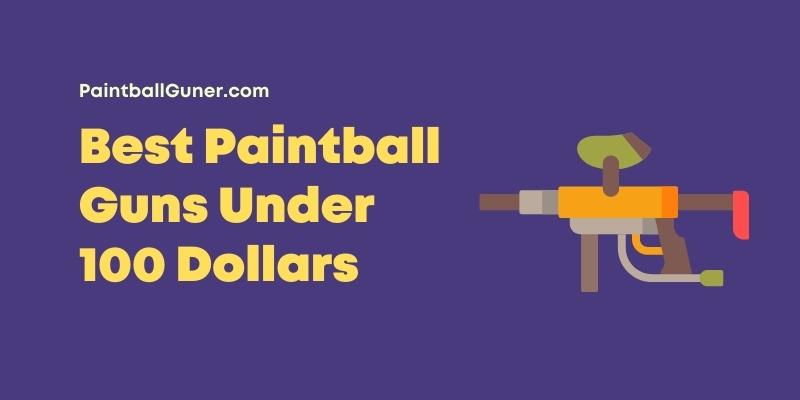 I’ve been playing for over a decade and have reviewed a lot of paintball guns. However, I haven’t written about the best paintball guns that are under 100 USD until now.

All of these guns will be on the affordable end of things, meaning they’re going to be good markers for beginners looking to get into the game. But don’t mistake “beginner paintball gun” for “cheap”. Many of these markers are made to last and serve the budget player well into their intermediate years if they stick with the sport!

I’ve put together this list of quality marker options that all meet (or exceed) that 100-dollar price point. Let’s take a look at these markers, and discuss who they’re best suited for.

Our Top Picks for Beginner Paintball Guns under 100$

Why Do You Need a Paintball Gun Under 100 Dollars?

For many beginner players, getting into paintball can be an expensive proposition involving a long list of gear including masks, tanks, hoppers, and more. What makes things worse is that these items usually have to be bought one at a time too – mask first, then gun later; loader lastly.

That means you’ll need an initial investment of around 200 dollars plus the cost of paintballs. That’s a lot to spend on something that might not be your cup of tea in the end!

You probably don’t want to shell out money for the gear you aren’t even sure you’ll like, do you? A wise player will choose an entry-level marker that can get them started playing the game while granting them a little room to improve their kit and get upgraded later at a minimal cost.

This is where our list of some of the best paintball guns under 100 dollars comes in handy. You can get your feet wet without breaking the bank!

What Are The Consideration Points When Looking For the Best Paintball Guns Under 100 Dollars?

Budget is obviously a key concern when we’re looking for beginner paintball guns. But there are other factors to consider too:

1. Reliability and durability of the marker:

You want something that will work when you need it to and doesn’t require too much TLC. You don’t want to have to replace parts or do time-consuming maintenance every other game.

2. Size and weight of the marker:

Paintball markers are heavy! Even if you’re just carrying one into battle by yourself, it’s still going to feel unpleasant once the action gets hot. You should look for a gun that has good ergonomics to reduce fatigue.

If you’re just starting out, you can’t be having over 10 balls per second in your hopper – any more than that and you’ll be breaking paint when it breaks the sound barrier!

4. Flexibility when customizing the gun/ability to upgrade:

This is a biggie. Paintball markers aren’t like firearms – it’s easy and cheap to make performance mods to them. You need a marker that will work great out of the box but can take upgrades as you become more experienced and start caring about what happens inside the gearbox!

Paintball markers can be fickle beasts – they give out if you push them too hard. Let’s say you’re playing a speedball game on a hot day with some sun baked paintballs.

Such conditions don’t bode well for your marker as the internal components heat up and things start to gum up. You need a gun that works well in all conditions, from 30 degrees to 120 degrees!

Maintaining your marker is a constant hassle if you’ve got no idea what you’re doing, and it can be detrimental to the gun if done wrong! You want something easy to strip down so you don’t have to worry about configuration changes on the field.

That was a good run through of the key considerations when we’re looking for beginner paintball guns under 100 dollars. Even if you don’t end up buying any of the markers we reviewed, this information should help you make better and more informed buying decisions in the future!